Last summer I dug up a Leamington brick in my garden. 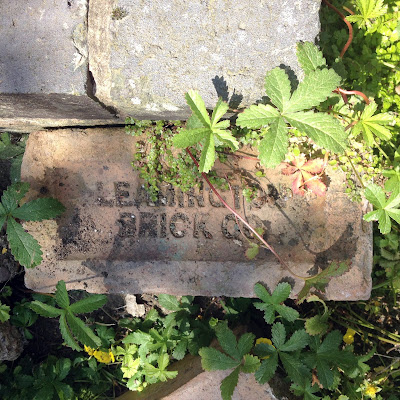 I was curious, and a little googling turned up a brief history of Leamington Brick Company. The location of the former kiln and clay pit is now near the centre of town. I also learned there was nothing left of the buildings and little obvious earth-workings, but I had some spare minutes so I went to see.

Nothing remains apart from a road name: 'Kiln Close'. There's a grassed park, Villiars Street Park; no more than some trees, a circular path and a play area enclosed by housing. 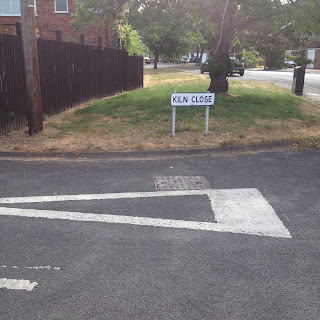 The houses were built with a different brick to mine; lighter, patchy and orange, whereas mine are more uniform in colour, although they vary brick to brick from light pink to blushed red and burnt purple-brown. My place was built in 1957, and, seeing as the brick company ceased to trade mid-century, it's fair to assume the brick I dug up could have been one of the last to be fired.

This is the park:

Panoramic view makes it look bigger and more dramatic than it does in reality, still, it's strange to think of this small park as once being an industrial landscape. It doesn't seem the type; it looks too subdued, and as if it's always been here.

Changing land use is the story of western capitalist progress though. At one time Warwickshire was dotted with brickworks using the clay deposits within the swathe of Mercia Mudstone that stretches in a curve across the UK from North East to South West and which underlies much of the West Midlands. So just West of Campion Hill, there once would have been several large one or two storey brick buildings and at least one tall, smoking kiln chimney. At one time probably notable in the landscape but now completely erased. Perhaps the claypit was exhausted, or the business no longer viable as bricks became available cheaper elsewhere. Maybe it was more profitable to sell the land for housing.

In the twentieth century much of the UK's manufacturing was replaced by service industry. Land use follows this, for as a park this land now services the leisure requirements of the nearby population.

I'm interested in this town's growth. Since I am witnessing it expand before my eyes right now, somehow it makes sense to trace the story of its growth backwards too. Although little trace remains of Leamington's brickworks, another, at Napton on the Hill, outlasted it by decades. Although it too is gone, the site is visible. Although local consultation is underway for building 80 more new homes on its brownfield-classed site, so that may be worth exploring soon.

Email ThisBlogThis!Share to TwitterShare to FacebookShare to Pinterest
Labels: silverhouses